couldn’t stand on its own when it arrived. The base had been broken and the castor misplaced. The papiér maché skirt had cracked and spread apart, distorting as it had done so.  The apron was broken and loose and pieces had fallen off, some of which were lost. The lacquer was dirty and discoloured and was missing some shell inlay.

Starting with the skirt which was cracked and badly distorted. This was allowed to relax in a controlled atmosphere and was brought back in line as far as possible using gently extended pressure over time. It was then allowed to rest. The crack was still somewhat misshapen but better. This was filled using papier maché coloured to match and the design replaced using watercolours, the finish was emulated in the crack area.

Attention turned to the apron, it was dismantled and re-attached. The missing areas were re-carved in balsa wood which had been steam bent to match. These were re-attached , given a coat of gesso and toned to match the underlying  colour. The client (a museum) wanted original to be distinguished from the restoration, and didn’t want it re-gilded.  So a bole was applied to emulate the missing design. Incidently the original design did not have a coherent design throughout but had been hand painted/gilded. 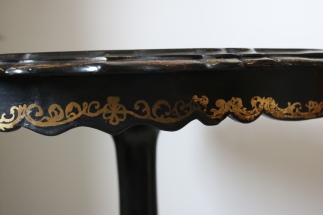 The wood at the base was replaced and the castor fixed into place. He whole item was then surface cleaned to bring the table back to life. 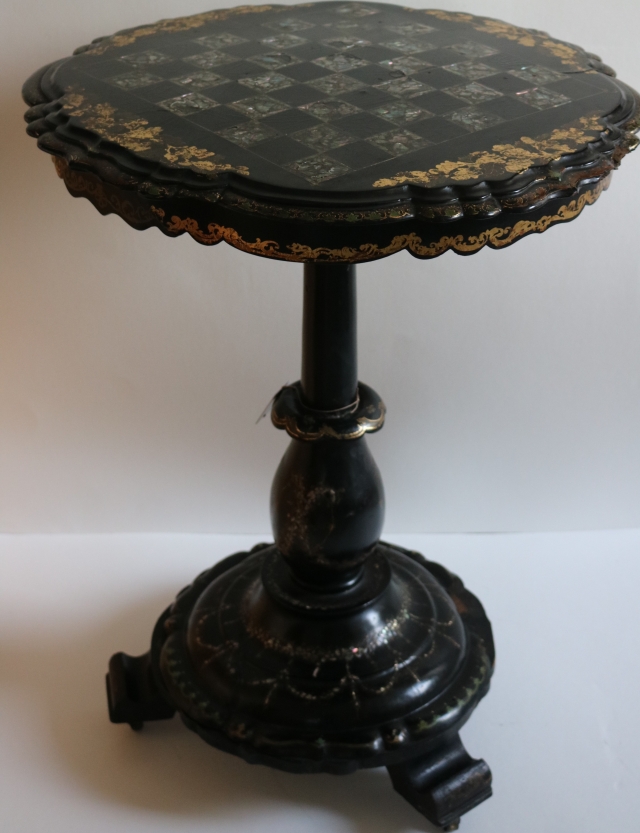 Hello, I am Julia Park-Newman, an accredited conservator working for Museums, Archaeological Units, Churches, Heritage Bodies and private collectors. I hope that you enjoy what you see!